We are delighted that our school is having building work to enhance the facilities we already have and are excited to share the plans with you. We will post pictures regularly on this page and on the school Twitter feed to show you how the build is progressing.  The photographs below show the front elevation of the school along with a plan which shows in think black lines the new build and how it is being attached to existing buildings. We will have-

All these additional spaces will compliment the areas we currently have as well as providing new teaching and learning spaces. 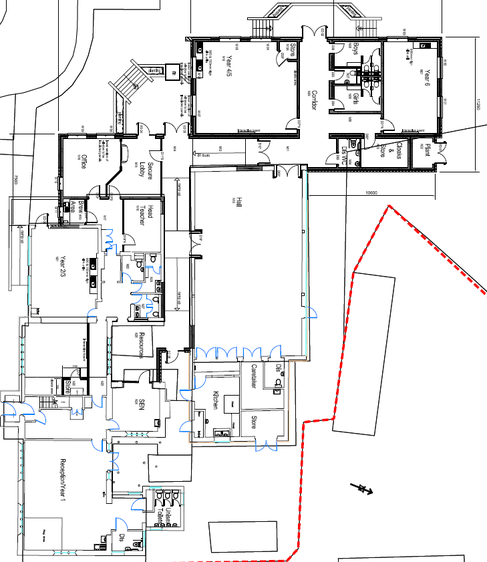 BUILDING BLOG- B and E Boys have the contract to build our two new classrooms and complete the alterations to our current school building.

Over the last few weeks there has been even more digging as the builders mark out the foundations. Yesterday cement was laid in the channels dug out along with metal frame work. 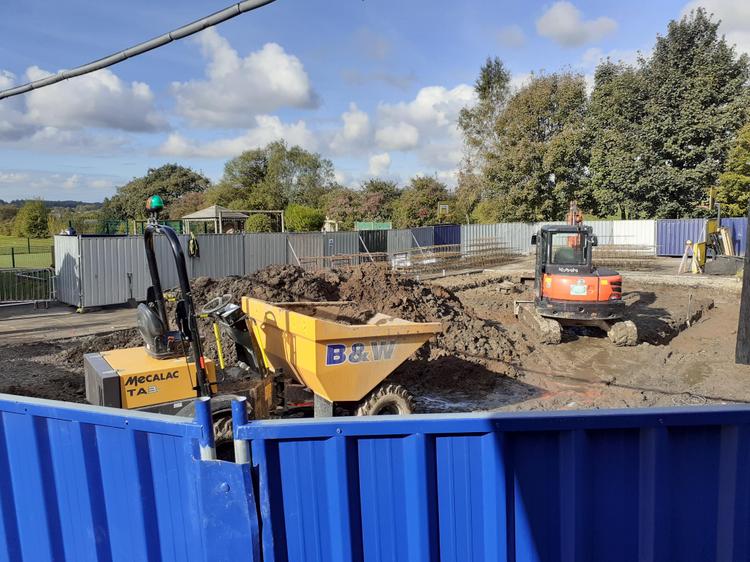 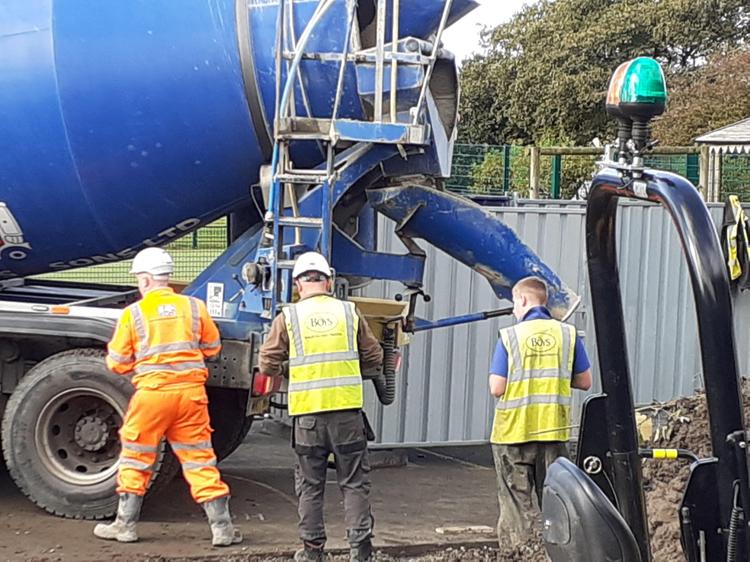 Two new cabins have arrived which will be the temporary office as the new entrance to school is built. Mrs Worsley and Mrs Hunter will spend the winter in the front white cabin whilst the second will be additional toilets for Inventors whilst the KS2 toilets in school are out of action. This week extra fencing and ramps will be added to ensure our site remains safe for the children and staff. 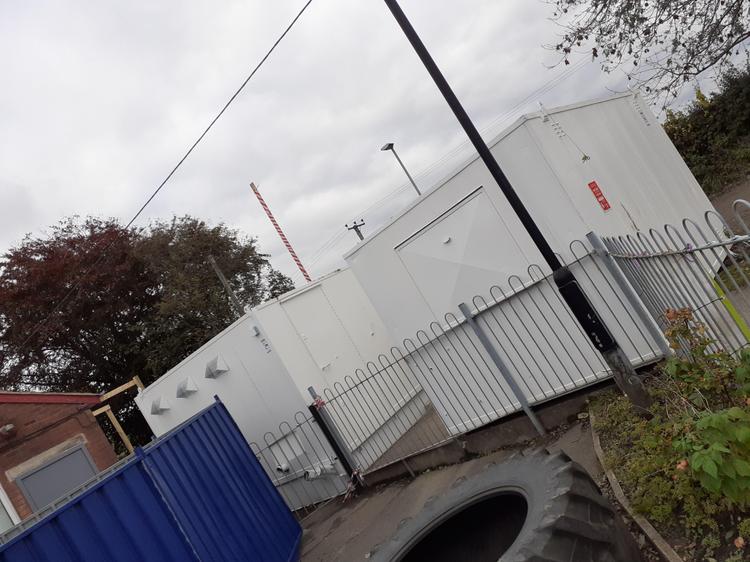 This week additional cabins have been brought to site for the contractors and the path has been completed which comes all the way from the back of the school hall and down to the bottom gate to ensure Explorers have a sturdy path to walk on to get to and from their classroom.

There have also been some diggers on site which the children have enjoyed watching dig up the tarmac from the playground to get ready for the foundations of the two new classrooms to be built. 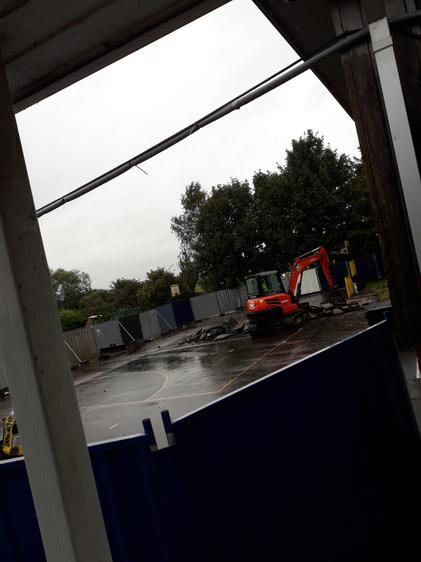 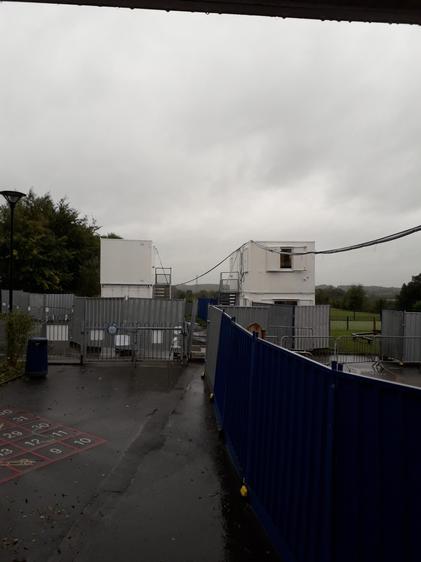 Next week the school office will be replaced with a cabin as they take the roof off ready for the renovation and a temporary classroom will be created at the far end of the hall for Adventurers as we say goodbye to the conservatory!

This week the construction cabins will arrive on site and the staff car park will be out of bounds as they set up the site compound area. The main silver gate will remain in action throughout the build. There will also be a new path created that will ensure we can get around the MUGA pitch and to the path which leads to the bottom gate.

Inventors class moved into the school hall this week as a new fire door and ramp were added to their classroom. The children were fantastic- thank you for being stars. The blue gate was moved to Explorers garden area, which replaces the large wooden gate and it now has fob entry! We have a temporary door in the outside corridor- watch in the Peep of the Week to see what we make it into! 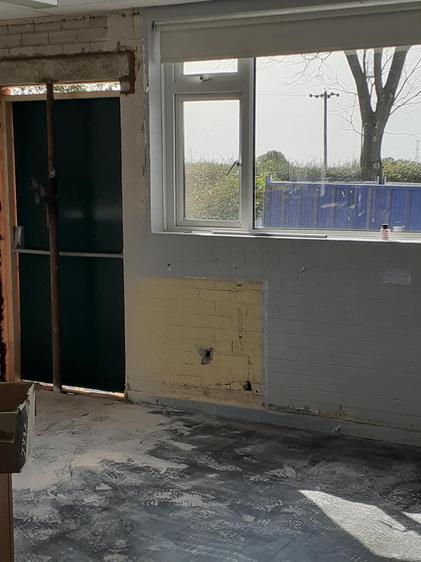 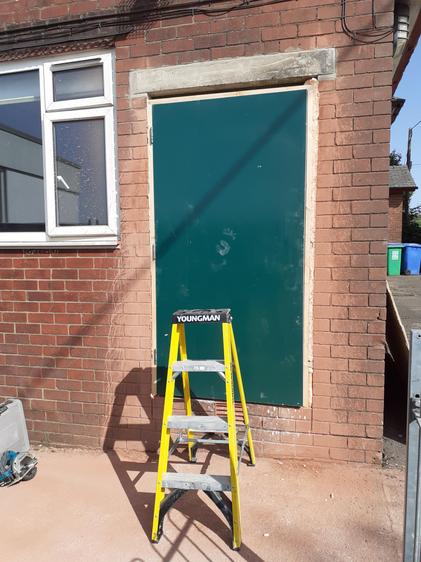 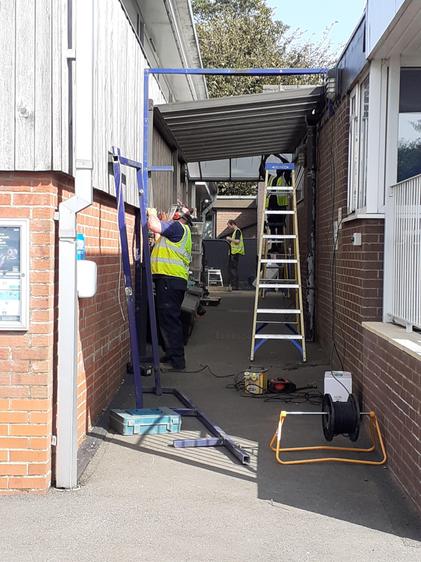 The soft start to the build begins where we will see the boards going up where the new classrooms will be built. We have had some electrical work to move the server and fire panel. 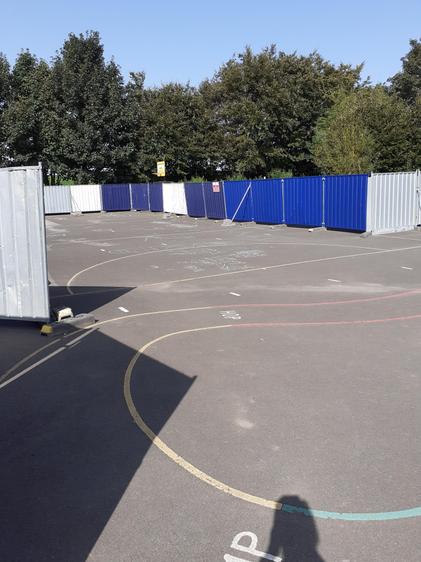 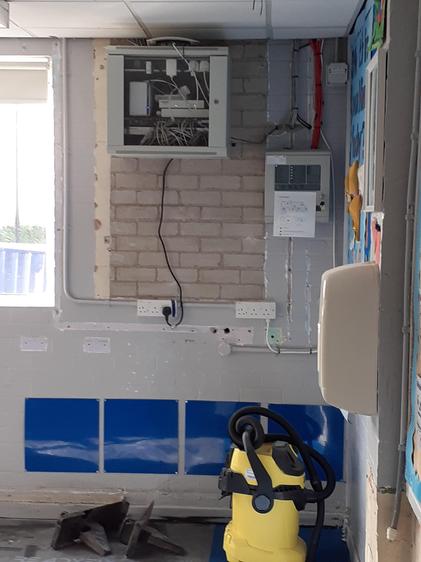 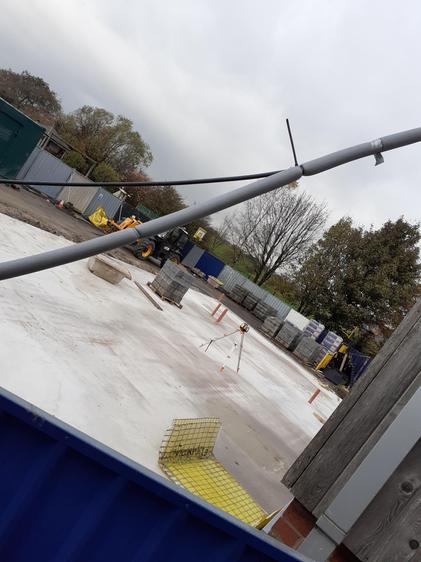 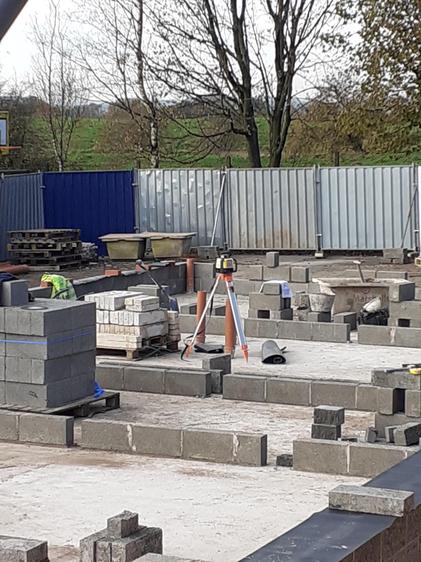 The foundations for the new classrooms are now firmly in place and the brick layers are on site. It is starting to take shape. Year 6 are now settled in their temporary classroom in the hall. At the end of next week Mrs. Worsley and myself will move to the portacabin and work will start on the new office.

Mrs. Worsley and I are now in our cabin and work has started to demolish walls in the offices to create a bigger space, put a new roof on it and make the outside corridor internal. This will mean that the builders will create additional corridors/tunnels to enable us to access the different places around school.

The new classrooms are really taking shape and the brick layers have nearly completed the damp course. 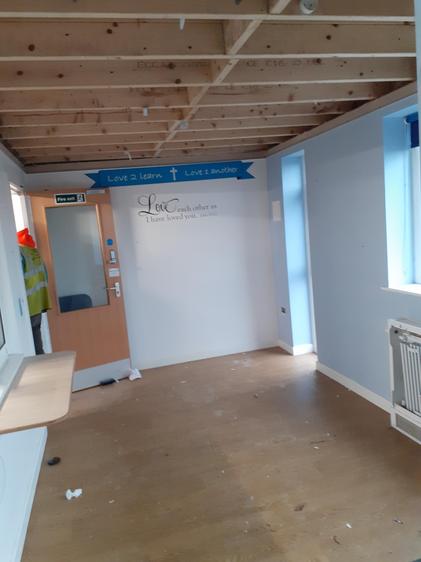 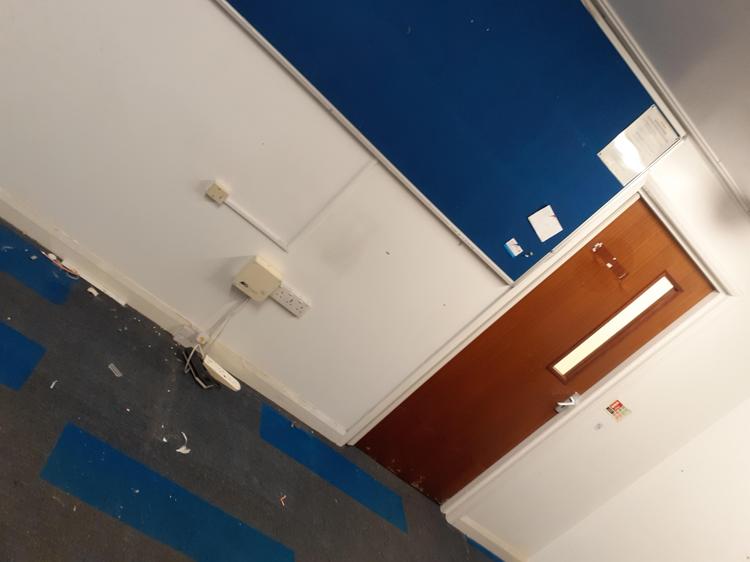 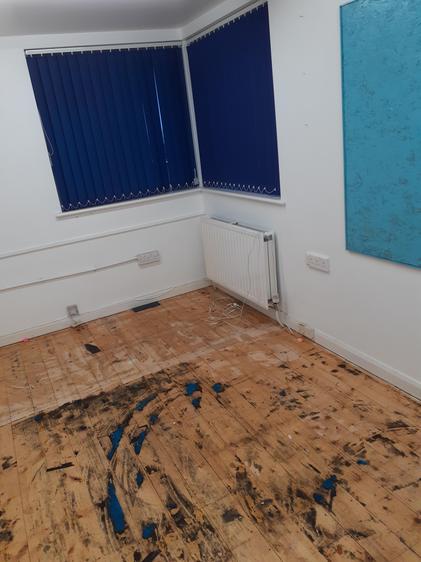 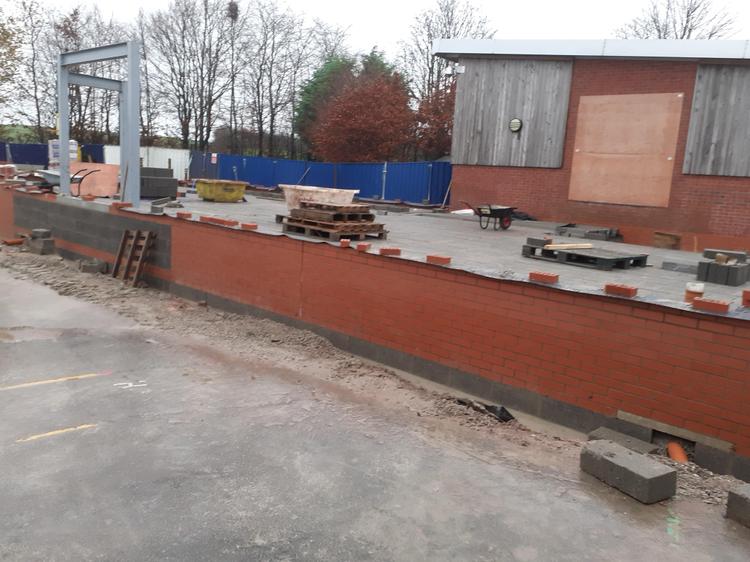 This week the lobby and conservatory have been taken down and the footings for the new alterations and internal corridors are being dug.  The builders continue to add blocks to create the walls to the new classrooms- the wet weather is not helping so we hope that passes soon!

The team also re-laid the square matting to provide a path to the MUGA to stop children getting too muddy on the way to PE! 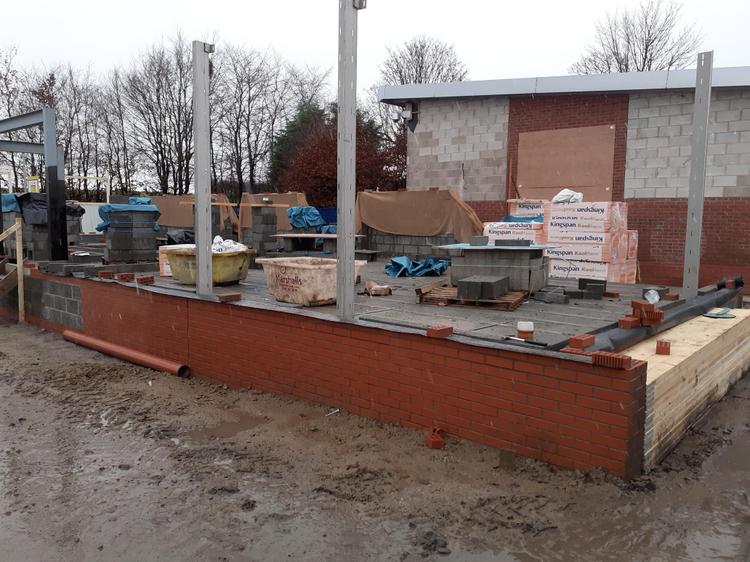 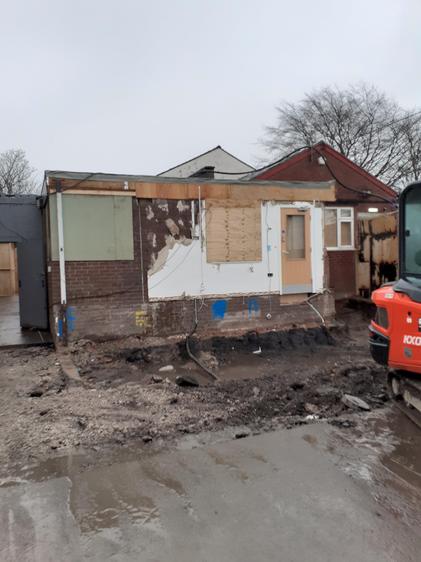 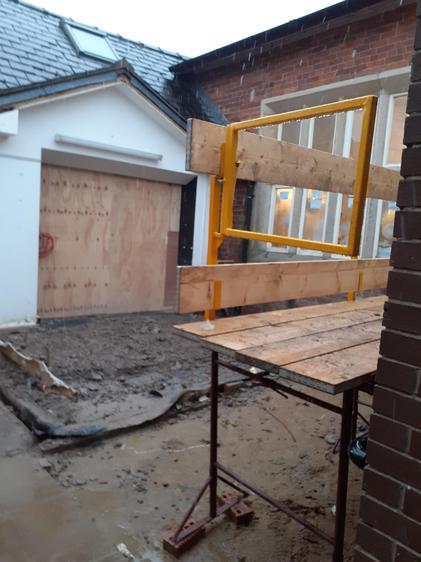 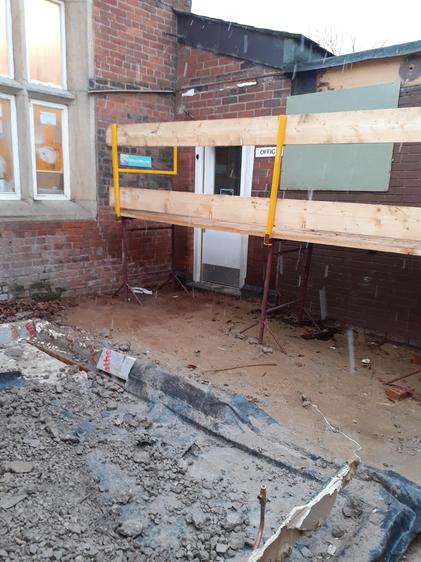 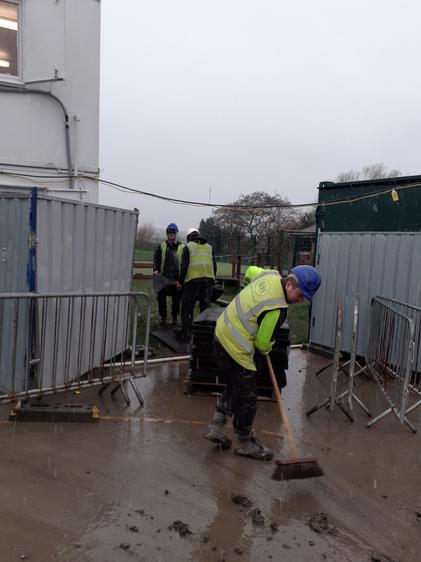 The builders are back on site and very busy after a well deserved Christmas break! The new classrooms are taking shape and the foundations for the internal corridors are being dug out too.  Whilst there are not as many children in school they are taking the opportunity to do some of the internal works in the hall and will be starting on building a corridor in Discoverers class next week too!

Work is being done on the foundations to create our new HUB area where the old Year 6 conservatory was. This will become and internal area and the large windows replaced to create a fantastic feature. This area will be a great space in which children and adults will be able to learn and relax together.

The corridor is also being built in Discoverers class ready for the wall to be knocked through to create a HUGE classroom for them. Mrs. Howarth is busy looking for a new reading area for the classroom which is very exciting. The hall windows have been taken out and bricked up in preparation for the external corridor to become internal.

The weather has been bad for building this week but the team have continued to work hard and started the brick works on the new office area on the dryer days. They have been busy on the internal works creating a new concrete floor in our hub area and the metal beams in place for the stud walls to create a corridor in Discoverers classroom. A new path has been created to and around the MUGA pitch so we don't get as muddy when going to PE!

The builders have been very busy this week putting in new radiators and pipework in Inventors and Discoverers class ready for the new boiler.

The floor has been put down in the new office and with the sun shining on a few days this week the brick layers have been able to get the internal walls done in the new classrooms.

The scaffolding is up ready for the work to beginning on the new roof which will cover the outside corridor and the ‘HUB’ which was the Year 6 classroom.

It is getting very exciting as we can see the new building take shape and the new spaces we will gain.

Wow the building work is really coming on and they are getting to the roof. The new roof will cover the new classroom but will also stretch over what once was the outside corridor and year 6 conservatory area. Work had stopped on the year 2/3 classroom for now as we welcome all the children back on the 8th. It looks great from high up! 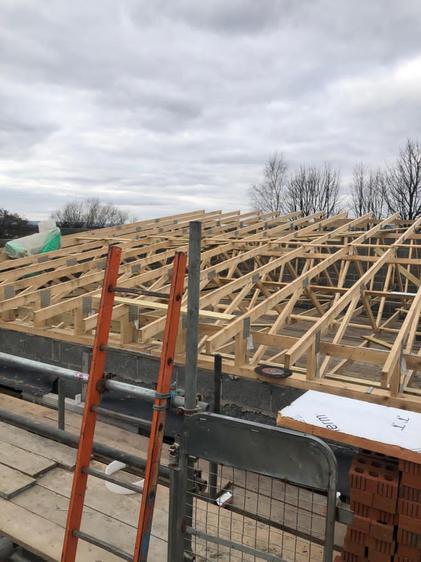 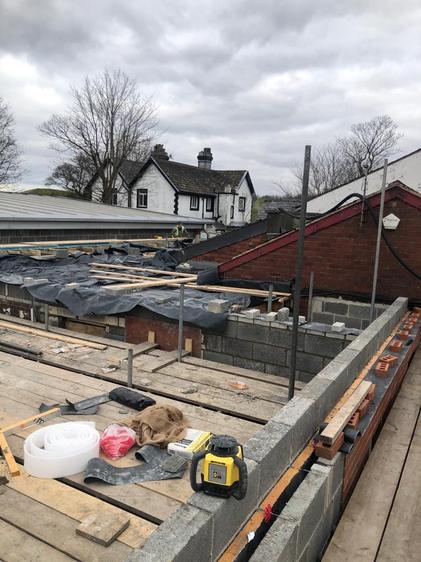 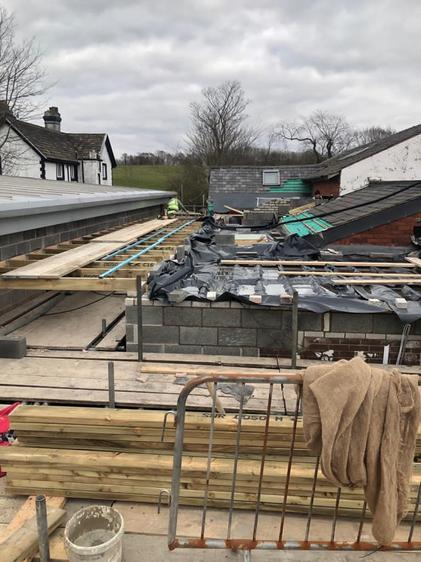 Discoverers class have been working hard to learn their lines for Eddie the Penguin Saves the World and Year 6 supported by Inventors class performed Wow! What a year! Although we couldn't have parents/carers in to watch we swapped our stage for a green screen this year. The children were amazing! Watch the performances under our children's tab and the Video conference centre.
Top

Unfortunately not the ones with chocolate chips.

Some cookies are necessary in order to make this website function correctly. These are set by default and whilst you can block or delete them by changing your browser settings, some functionality such as being able to log in to the website will not work if you do this. The necessary cookies set on this website are as follows:

Cookies that are not necessary to make the website work, but which enable additional functionality, can also be set. By default these cookies are disabled, but you can choose to enable them below: